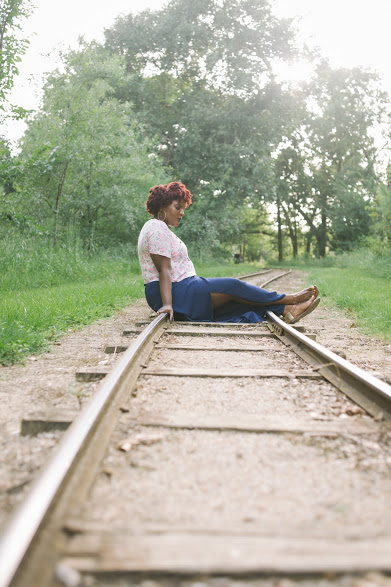 2 weeks. I took a moment to unplug to recharge, and I didn’t know how much I needed it. I equate it to being dehydrated but never knowing it until you taste water again. I was running on empty, operating on fumes, even though I was spending time with the Lord daily.

How did I get here?

Why was I staying here?

My time with God had become routine. Every morning between 5:00 and 5:30 am, I awoke with a desire and hunger to meet with My Father, but I realized that I was showing up to the table, but not really being present. It had become one of those family dinners, that everyone HAS TO attend, but no one really wants to be there, so you sit and eat without talking, waiting for the moment that it’s ok to leave without seeming rude. This was what my quiet time had unknowingly become. I have been reading through the Old Testament this year, and I realized on one day, while surrounded by my Concordance, Bible Dictionary, Commentary and Bible, that I was not growing. I was coming to the table, but not eating. I never meant to be here, but somehow this is where I woke up.

The operative words are I.WOKE.UP. And once I realized what was happening, I refused to stay there. I had to do something different. So I took a break from my social media, and I fell back in love with My Savior. It is possible to feed everyone around you, while starving yourself. I had begun to get a Word, so that I could give it away, all the while never stopping to get refueled myself. I would hear a Word and immediately think, ‘This is for somebody’, so I would post it on Social Media and someone always remarked how this was exactly what they needed to hear. But during the past two weeks, every Word has been for me. Every unmasked spiritual truth, every revealed revelation, every divine manna word – has been for me. It wasn’t meant for me to share, it was meant for me to be Mary and just glean at the Master’s feet. Oh, taste and see that the Lord is good…I.AM.SO.FULL. The journey of this time away has been a start of unexpected prayers and indescribable blessings.

During this time, due to some overactive imagination ‘mind monsters’ and miscommunications, I had to refocus on Christ and take my hands and expectations off of my budding relationship. After my broken engagement, I made a covenant with the Lord that never again would I place a man in His place, never again would I idolize a relationship, and never would I place faith in a man that should only be placed in Christ. We serve a jealous God and He takes His covenants seriously. So unbeknownst to me, He orchestrated it in such a way that I would keep this vow to Him. He gut-punched, open palm slapped me. The blow stung so much that my eyes smarted, but that pain was so far outweighed by the glory of realizing where my wide open nose was taking me. I  was heading down a path that I vowed I wouldn’t go again, and because God will sometimes, most times, save us from ourselves, He set a roadblock there. The Bible says, “A prudent person foresees danger and takes precautions. The simpleton goes blindly on and suffers the consequences.”

Aren’t you tired of being the simpleton? Aren’t you tired of praying a prayer for God’s will and then getting upset when Christ has to demolish your own, just to get you to recognize His? I know I am. I can’t pray for God to use me for His glory, to have His way in my life, and to direct my path – and then get up, dust off my knees, and go on about my day according to my will. No more.

I realized that I was placing expectations on something that hadn’t solidified in the foundation to sustain them. I was saying I wanted this to be different, but I was unknowingly treating it the same way. I was approaching it the way I approached every other relationship, yet praying for God to do something different. Insanity. But the beautiful thing about unplugging your flesh, is the recharge your Spirit gets. His Word is a lamp unto my feet. HE reminded me to forget the former things (the old ways that I approached relationships, the former ways in which I would determine if this guy was ‘the one’), and to recognize the new thing springing up (to accept pursuit without controlling it, to allow God to speak to him and me, not through me to him).

A friend was God’s mouthpiece and said ‘He can’t hear from God, if he keeps hearing from you’. I was trying to control the dialogue instead of allowing God to dictate. God reminded me that He didn’t need my help in creating the Universe, He shole don’t need my help in orchestrating a relationship. So He removed me from the picture. He froze me out. And he began to speak to his heart as He continued to heal mine. He showed me that if I couldn’t learn to trust him in the little things right now, that I will always second guess him in the big things in our future. God gave me the strength to submit to His Will, yet the freedom to choose my own, then sat back and waited to see which I would choose. Of course, I failed a couple of times- but then I got it right. I surrendered and submitted, and I saw a glimpse of what marriage will look like, IF I allow God to direct it. And just that vision, is enough to tie my will to the altar and pick up His. I can only imagine that love, and now I have the opportunity to experience it.

As I listened to his heartbeat in a hug, this was the conversation shared:

Me: I can hear your heartbeat.

Me: Yeah…because of me?

And mine skipped.
Let patience have her complete work…Love, I’m yours.