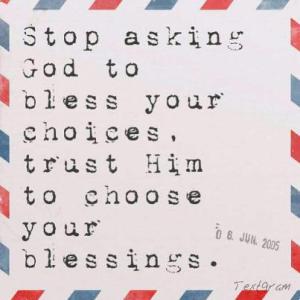 Memory Verse: Many are the plans in a man’s heart, but it is the purpose of the Lord that will stand. Proverbs 19:21

Challenge: Think of ‘your list’, those characteristics and traits that you believe your spouse MUST have. Concentrate on one of the most shallow ones that you have, then ask God to allow you to dig deeper. Replace it with a more significant trait, a deeper one.

THE LIST. Everyone has one, even if you won’t admit it, you have one. Those essentials characteristics that you want your spouse to have. Some of them are very valid points and desires, and I don’t think that there is anything necessarily wrong with having these kind of expectations. For example, I want my husband to have a great relationship with his father because I want to dance with him at our wedding and it would be nice to call someone ‘Dad’ after 15 years of rejection by my own. This is a noble desire, and one that I truly want the Lord to fulfill, but I am spiritually mature enough to know that if God does not grant it, it’s because He has a better plan for me, not because He is withholding something from me. Our Heavenly Father gives His children good gifts. If he does not fulfill a desire that is on my list, it’s because it does not coincide with a need that is already on His list for me.

In Luke 5:1-11, Christ calls His first disciples, Simon Peter, James and John as they were fishing. Jesus tells them to ‘put out into the deep water and let down their nets for a catch.’ Peter immediately questioned Christ (He was always questioning something, huh) and informed Him that they had been fishing all night long and still caught nothing. “But nevertheless,” Peter replied that at His word, he would cast the nets.

I don’t believe that Peter decided to follow Christ’s directions because he believed Him, I believe He initially did it to prove to Jesus that He was wrong. Peter and Zebedee’s sons (James and John) were fishermen by trade, they had been doing this for a while, so they knew all the tricks of the trade. They were experts, with two Olympic gold medals in fishing 😉 to show it. They didn’t need no ‘preacher’ telling them how to do their job; but yet Peter cast the net. Even in Peter’s doubts there was something about the nature of Jesus that made Him do what He said, even though he knew it wouldn’t work. And lo and behold, they caught more fish than they could haul in.

INSIGHT: How often do we consciously or subconsciously tell God we can pick a better mate for ourselves than God can? We do this by getting into a relationship that God has not ordained nor arranged, but one that we think meets the characteristics of our list, so we jump in. Then, we bring that relationship to God when it isn’t going the way we believe it should go and ask God to fix it. In my spiritual mindset I hear God saying ‘I didn’t give that to you, so I’m the reason it’s falling apart. I won’t fix something I didn’t ordain for you to have in the first place’. So we sit and watch our relationship crumble, and then we blame God for not bending to our will instead of repenting for not submitting to His. This ‘LIST’ has gotten me into some bad relationships and I have the healed scars to prove it. Even if you don’t think that the method God is taking you on is right, trust that He is right and as Psalm 119:68 says ‘The Lord is good and He does good’. He knows what he is talking about. He woo’d and captured your heart, didn’t He? You can trust Him to take that same care in orchestrating your union.’

I’m sure you can understand how this translates into relationships. Many of us have been dating for a while. I have labeled myself as a Reformed Serial Monogamist, because I was always in a relationship, coming out of one, going into another or had a least 3 ‘potentials’ floating around waiting on their chance. Thanks be to God for deliverance. We often think we know what we want in a mate, those essential characteristics that a spouse HAS TO HAVE in order for them to compatible for us. In a way, we are telling Christ that we can pick a better mate for ourselves, when we don’t consult with Him BEFORE we pick out the China patterns.

We often ask God to bless our choice, instead of waiting on Him to ordain the meeting. What does this mean? It means that we will find the best man or woman that fits the characteristics on our list (whether it is written or mental), and then ask God to bless that relationship, as opposed to asking God to ordain the meeting of our mate. If we would ask first, we wouldn’t need to come behind asking Him to bless our will, because we waited for His.

Vow to do this with your next relationship and see the difference. Allow God to orchestrate the initial meeting and follow His specific directions throughout the entire relationship, and see how ‘deeper’ the relationship is.

Dig in deeper, forget those things that you think you want and allow God to give you what you need. If you hold too tightly to your own agenda, your hand isn’t open for God to give you His Will. Don’t spend any more time as the early disciples did- fishing all night and not catching anything- use God’s Provisional System to direct you and then only ‘let down your net’ once more- to catch the fish that He has waiting for you.

INSIGHT: ‘You’ve tried it your way this long. How is that working out for you? Why not try it His way now?’

Blessings in this journey.